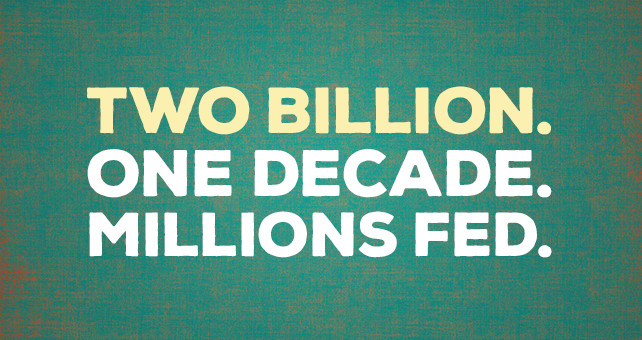 If you’ve known Publix for any length of time, we hope you’ve learned that giving is at the heart of who we are. We believe in doing good together for our communities.

That’s why we’re proud to share that we’ve given more than $2 billion in food to Feeding America® member food banks and other nonprofits since 2009. That comes to more than 625 million pounds of food for people in need in our communities. And we’re not stopping there: We’ve pledged to give another $2 billion in food over the next ten years.

But the reality is that this is just one example of a commitment we’ve held. Our founder—Mr. George—taught us the value of helping those in need. We learned from the best, and almost ninety years later, we still follow in his footsteps. Our determination to give back has never wavered.

According to Feeding America, 1 in 9 people in the U.S. don't have enough food to eat—and in the Southeast, that’s more than 8 million people. The food we’ve donated as part of this program, which includes dairy, deli, meat, produce and baked goods, goes to more than 100 Feeding America member food banks and other nonprofits. The food is good to eat but unsalable and provides individuals and families facing hunger a way to bring more meals to the table.

So next time you swing by Publix, know that we’re not just a grocery store. We're working hard every day to do good together.